The HeiReS story – for 10 years already

Time flies like the wind when you always have a lot to do. And suddenly you’ve been self-employed for ten years. You have a lot to tell. So here is the whole story of HeiReS and of us … 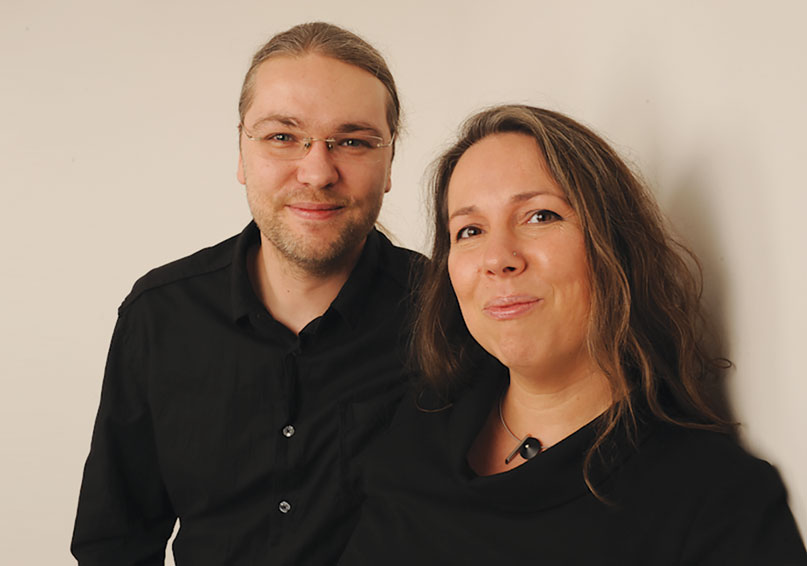 2009
In September, Lars and Peggy left their long-term permanent employment in the agency business together. They officially registered their business on 3 October 2009 and founded XAMLlab and XAMLfab as freelancers and sole traders with our skills as developers and designers. The 3.10. is a special date for us, as we are an east-west couple. Before the end of the year, we attended our first Microsoft conference, MIX 2009. Besides mega-inspiration, we were affectionately dubbed “The Designer-Developer-Dream-Team”. Back then, project work was still rather individual with little overlap – but together out of our workspace in our shared flat in Aachen. Already in the first year we were able to move good sales completely independently. In December, Peggy even held her first training session – on the topic of XAML with Blend.
Number of employees: 2 or 2 * 1, i.e. only Lars and Peggy 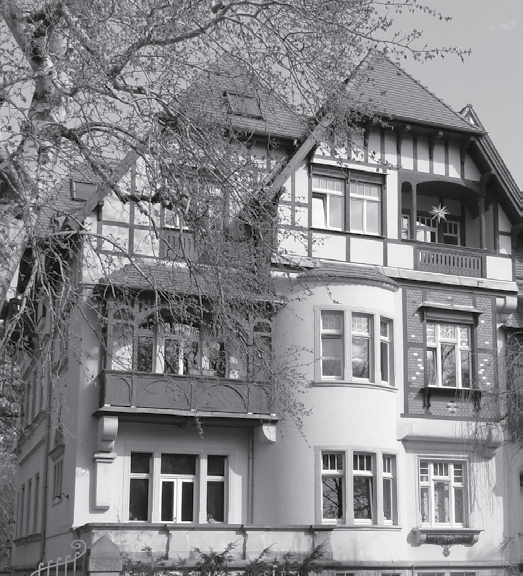 2010
Long planned out of longing for Lars’ home city of Dresden, we moved to Dresden together in the summer into a shared flat with a commercially usable office area. We had a great domicile in Dresden’s finest residential area near the Elbe, where we were able to work out creative technical solutions for our customers. This is what makes work fun. The core business of design and development services with Microsoft specialisation began there. With our first permanent employee Armin Reuter (Peggy’s brother) as project manager as a link between design and development, we became the perfect triumvirate for good software in September 2010. Armin has worked in the Aachen office from the beginning – as our man in the west.
Number of employees: 3 – with Armin in addition as project manager the perfect triumvirate for software from design-development-project management

2011
Manuela joined our Dresden office as a permanent graphic designer in January 2011. That was already something special, as we basically had a mix of home and office. In that year, we were also able to win our first big clients, such as Sirona and FiBuData, for whom we still work today. With our expertise, we went around as speakers at .Net user groups and conferences and gave lectures. Like 3D in WPF, prototyping with Blend, designer-developer collaboration with Blend or 1-2-3 Good UI. This year we were invited for the first time to participate in the Cebit at the Microsoft booth as experts for Blend.
Number of employees: 4

We have established prototyping with Blend for large software solutions so well that our client Sirona was able to score with great success at the dental show with Sidexis. In 2012, our UI design and UI development services became more and more intermingled. We therefore completed the transfer of the individual companies into a joint GmbH, which had been planned for some time, with the official founding of Heinrich & Reuter Solutions GmbH on 01.06.2012. Actually, we wanted to continue XAMLlab as a name, but at the last MIX in Vegas, the announcement of the change from XAML to HTML5 made it clear: technology dependency is unwise. It was Lars’ idea to manifest our names in the company name as the only constant. And Armin’s idea was the short form HeiReS, which we then transferred into a word trademark application for HeiReS, so that no one else is now allowed to call themselves that. The team started to grow with the founding of the GmbH, with Melli as graphic designer and Phil and Alex as developers, and suddenly we were 8 people. Therefore, we also changed the spatial situation and rented our own large office with team rooms for graphics and development. This year we were at CeBiT again. Some quite large clients as well as SMEs joined us.
Number of employees: 8 people – including Lars and Peggy as managing partners. 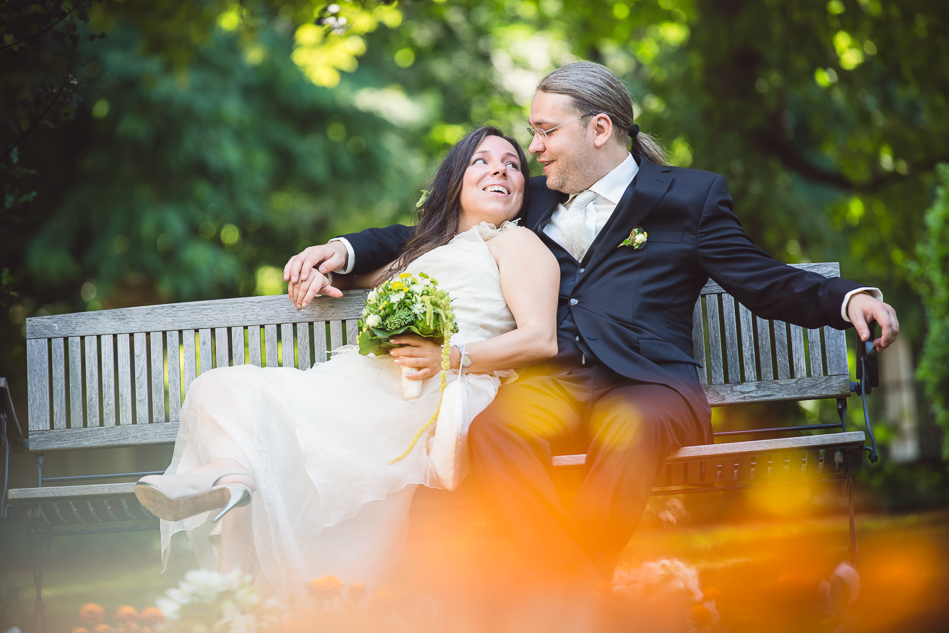 Another increase in staff – Antje is hired as an executive assistant, Fernando as a sales employee, Marika in controlling on a mini-job basis. First projects for Microsoft directly as a Windows 8 app. Lars and Peggy became MVPs – i.e. 2 of approx. 6,000 experts honoured with the Microsoft Award Most Valuable Professional. Due to the proximity to Microsoft, we were again at conferences in the USA – at the fabulous BUILD conference in San Francisco and the MVP Summit directly in Redmont. As is only fitting, we were also at the Microsoft stand at CeBIT. This time it was quite big for Windows 8, and on the side Peggy wrote and published her first book “XAML with Blend” as an independent publisher via Amazon. Personally, our highlight of the day was of course the wedding of the founding couple Lars and Peggy on 03.08.2013.

2014
Despite all the new topics and hypes, we have always remained true to our WPF field – as bread-and-butter business. In addition to a few major clients, we were able to get a large project for DB Projektbau, on which we worked together. On the personnel side, Tom joined us as a working student in development and Fernando left.rotz viel Arbeit haben wir nebendem noch die kostenlose Meine-Lernkarten-App für Windows 8 und Windows Phone 8 geschaffen. And to make sure we didn’t get bored, we travelled to the US again – this time to San Francisco and Seattle and spoke at a few conferences about our favourite topics: XAML, UI design, usability, Microsoft apps.
Number of employees: 10 people WPF remained our core technology and main business area this year – despite the app and HTML hype. Due to the crisis situation in Germany, we also did a big social project as an entrepreneurial volunteer: we conceived, designed, developed and filled with content the Welcome App Germany and released it as a free app as the first digital refugee helper worldwide – as a sign of cosmopolitanism in Dresden and Germany. There was quite a lot of press hype – even the Guardian called us. In the course of this, we were able to recruit Ahmad as a web developer and Simone as a marketing person, and Alex left. And because that wasn’t enough, at the end of the year we moved our company headquarters and our private offices to separate floors in an old villa in Dresden.
Number of employees: 11 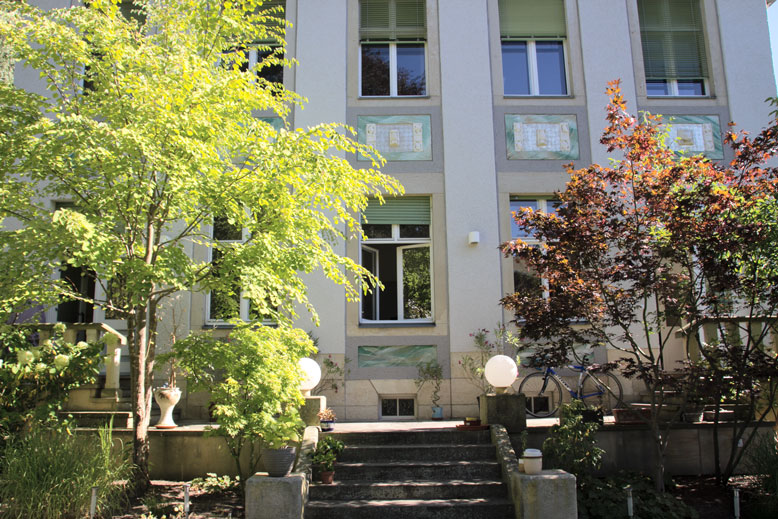 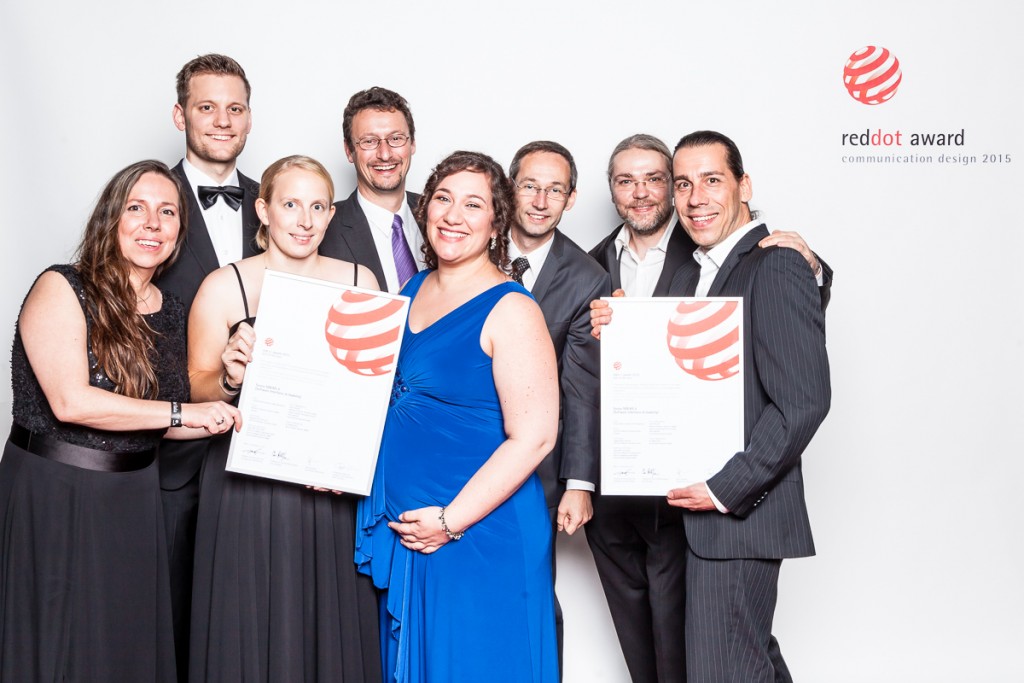 2016
Won several awards such as RedDot, Germany Design Award, A-Award. Intensive project work in a growing team. The highlight, including walking the red carpet in front of the Schauspiel-Haus Berlin, was certainly the RedDot Award. This year we worked intensively on the Welcome App to become Germany’s largest integration platform. This was also connected with the start of development of our own so-called “headlines CMS”. This year we were able to recruit Erik as a developer and Konrad as a graphic designer. Ahmad and Antje left. In addition to specialist activities, we also exhibited together at conferences in the context of inclusion, e.g. at the Future Conference Migration & Integration at the German Press Office. Even a film team from Microsoft USA came to our modest hut to report on our activities around the Welcome App. A highlight of the year was certainly that we were invited – because of the Welcome-App – to the Global Child Forum in the Royal Palace of Stockholm as 2 of 500 guests worldwide.
Number of employees: 9 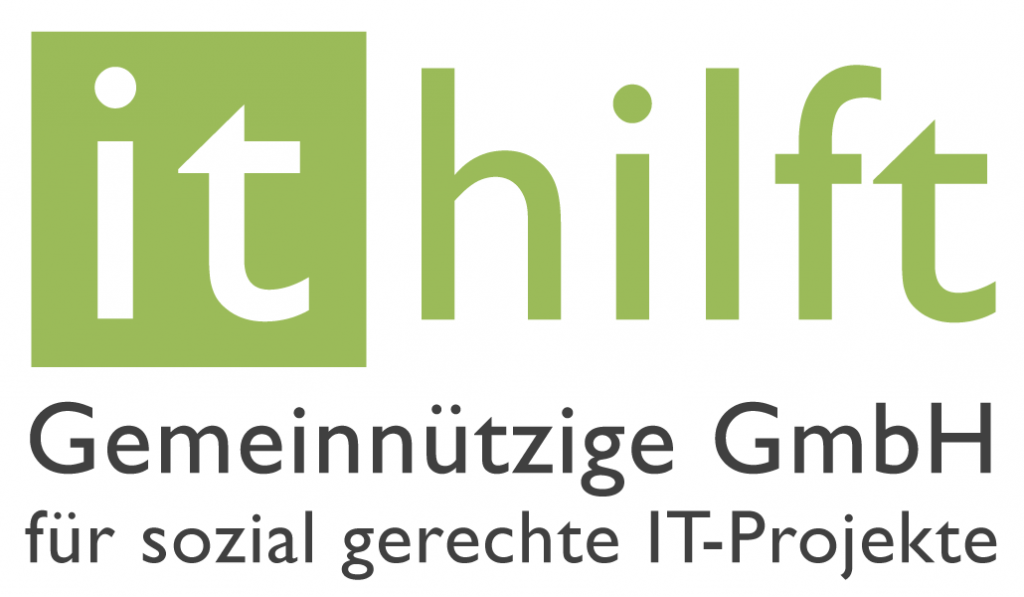 Already in 2016 we have understood: Non-profit activities do not work in the context of commercial enterprises. Encouraged by Peggy’s and Armin’s dad, “You are non-profit in what you do”, and with dad’s contribution of 50% of the founding capital, Peggy founded the non-profit sister company IT hilft GmbH in March – with all the official trimmings from the notary’s office, full payment of the 25 K and the tax office’s approval. Since then, Peggy and Armin have been the main shareholders of IT hilft gGmbH, which they run in an honorary capacity alongside their permanent positions at HeiReS. The fundamental transfer of all charitable projects from HeiReS to IT hilft gGmbH was also completed. Nevertheless, HeiReS is still a partner and supporter. With this change, we were able to better concentrate on our core business of design and development. In terms of personnel, there was a departure of Erik. Melli and Konrad and a gain of Thea as UI designer and Yazan in the office area. With these structural and personnel changes, we have repositioned ourselves and thus gained HeiReS professionally and personally. As boring as it sounds – WPF and software are and will remain our core business despite all the hype.
Number of employees: 10 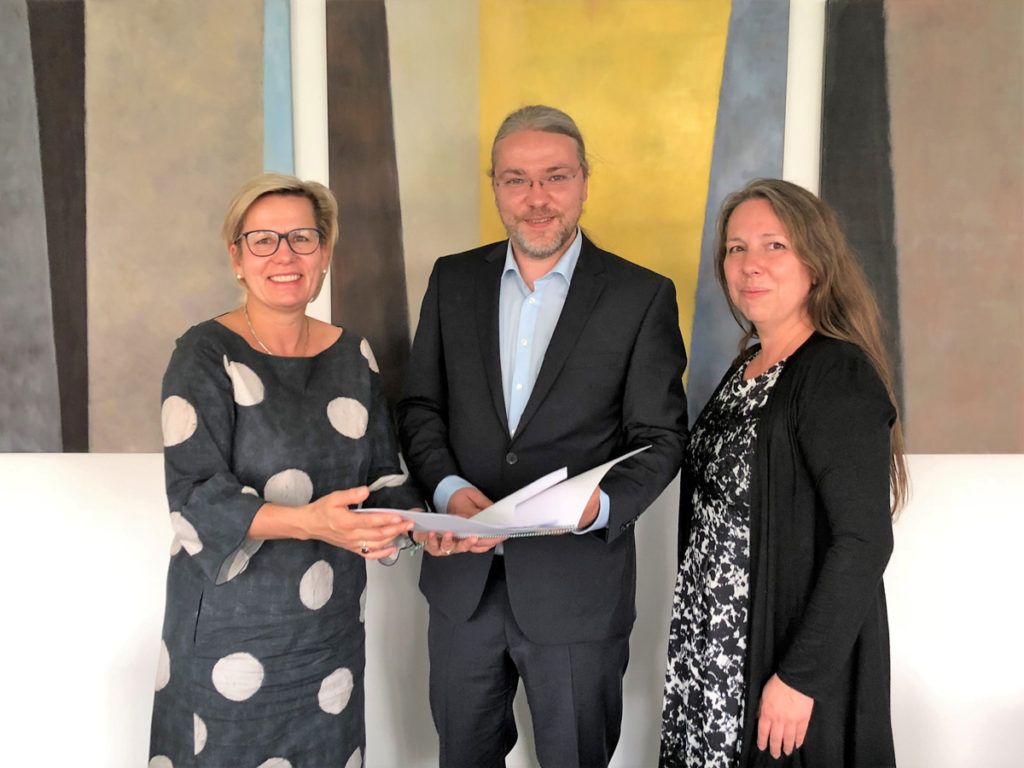 Due to our high cosmopolitanism, we were also able to win Moataseem as a developer in times of a shortage of skilled workers. Thanks to our performance with the Welcome App and our technical CMS, we have also started a new social innovation – with funding from the European Union with the support of the Saxon Ministry of Social Affairs. The platform for a better work-life balance thus finds its start and will accompany us as a second major social innovation until its completion in 2019. In the course of this, we have hired Militza as a social worker for content editing. Our core business continues to be WPF for various clients, some of whom have been with us for many years, with more and more focus on medical technology, industry and administration. However, due to our app competencies, more and more clients have also chosen us as app developers. This year we were in Redmond for the last time at the MVP Summit – with the basic feeling of not coming back, to a country where foreigners are no longer welcome. Visits from the Royal Family of Sweden are and remain highlights – Lars and Peggy were again at the Global Child Forum. There we also signed WePledge4Children as partners for both IT hilft gGmbH and HeiReS – a contract in the cause of children’s rights. A lot of investment in the social innovation family-and-work. HeiReS with its entire portfolio is exhibiting at the Smartcity conference in Barcelona at the stand of the state of Saxony. Core business WPF extended to app development, mobile design, HTML development and AI. Own chatbot with morality. Portfolio expanded to include accessibility in and with IT. Departure of Moataseem, Militza. New focus on accessibility in and with IT. Project certification on accessibility as well as partner accreditation. Certification as partner for GoDigital (BMWI).
Number of employees: 11

Market launch of ConDiSys as a universal platform for larger content projects. Certification as an accredited testing partner for accessibility. Several major trade fair appearances. Signing as a partner of the “Diversity Charter”. Launch of Familie-und-Beruf throughout Germany together with the non-profit IT hilft gGmbH. Partnership GoDigital. Acquisition of another developer and possible sales support.
Number of employees: 11